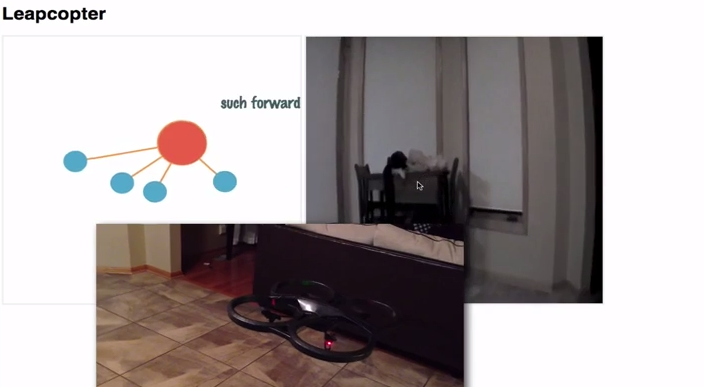 I finally purchased a Parrot AR Drone 2.0 this week after having a blast
playing with one at JSConf last year! I also recently got a Leap Motion
controller, and I thought it would be fun to get them to play together!

The leapjs code was a bit buggy, especially when trying to use it from
Node, so I am interacting with the Leap Motion exclusively in Chrome and
then using socket.io to send commands up to the server, which is
controlling the drone.

On the server, I am using node-ar-drone to control the drone, and
ar-drone-png-stream to
get the video feed from the drone in the browser.

Here is a list of gestures and the what action they invoke:

The drone moves very slowly, as I didn't trust a Leap-controlled drone to
go flying fast in my house quite yet. Also, once 'Land' is triggered, the
drone won't take off again, just in case I panic and start flailing about
in front of the sensor.

My future plans for this demo include to cleaning up the code (it's a mess right
now), and adding more gestures (turning, up/down).